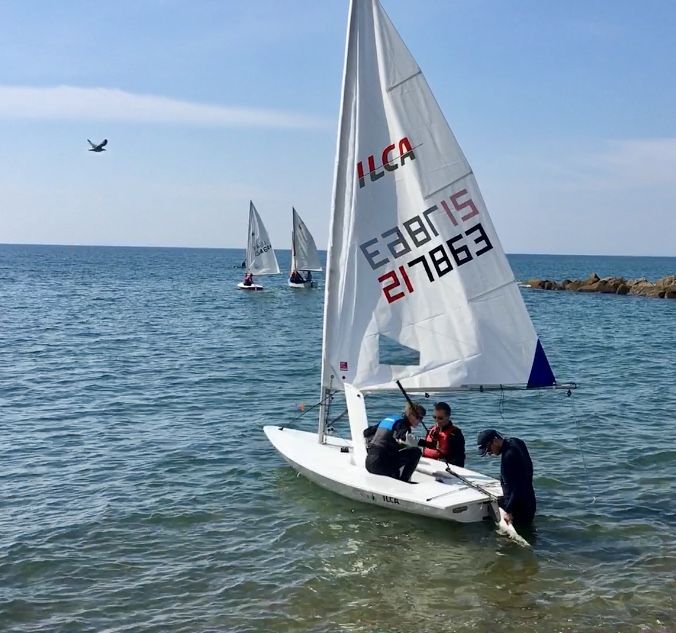 Flat sea, bright and sunny evening, great conditions for our first race. Seven Lasers on the water this evening, making for a good, competitive race. One laser capsized and turtled (when the mast of your boat ends up pointing directly downwards) unfortunately resulting in a bent mast. I had a good race and finished in 3rd place, which I was thrilled about.

Conditions were too windy this weekend so we could not go out as it was too choppy and dangerous. At Sidmouth, it is sometimes quite tricky to launch and recover, as it is so open and exposed. It is usually quite choppy, and with more wind it becomes choppier, which can make for a fun and exciting sail, but on this occasion it became unsafe.

2nd evening race of the season.

I took out my 4.7 rig (a smaller sail) today and I am glad I did, as it was blowing at about 12 knots, gusting 16. Almost everyone capsized this evening – including me once in the 2nd leg of the race. However, I was able to right my boat quickly and get going again. I ended up coming 4th in the race.

Light winds but completely shifted and picked up massively in the afternoon.

Today there were very light winds, so I swapped my rig back over to the bigger radial rig. In the morning we were practising race starts and because of the light wind, roll tacking. Roll tacking is where you use the weight of your body to gain a small advantage when you turn through the wind. After lunch, the conditions stayed the same for the first race, but just at the very end of it, the wind went from south to southwest to due east in under 10 seconds. At one point it built from 4 knots to about 15-20 at the peak of the squall. This meant that the safety crew were kept busy as the wind and waves grew. I had considered going back in in between races, as I had my radial rig on. The wind eventually died down a little and I was glad I did not.