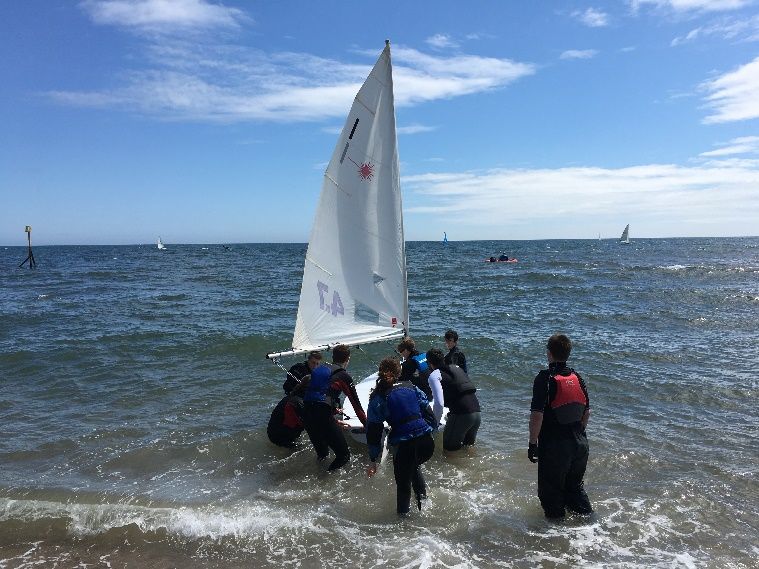 The tide was high when we launched so there was not much beach and we found it hard to fit all 12 boats on the small beach. Just as the race was starting, I was not in a very good position because I was on a port tack, which meant I did not have right of way so having to avoid another boat I missed the start line. I had to loop back meaning I lost time. If I had been on a starboard tack and had the right of way, I would not have missed the start line and I would not have had to make that extra turn. I learned from watching the America’s Cup that getting a good start is critical to having a strong race!

In the morning there was a light breeze which meant that I was able to practise some roll tacks (when you use your body weight to gain a small advantage when you tack) and light wind sailing. The afternoon started off the same and then near the end of the first race, the wind completely died so I was not able to finish the race, and in the end the safety boat had to tow me in. Very frustrating, but I would rather be bobbing around on the water than doing homework!

Today’s conditions were quite a light breeze again, which made for another good opportunity for me to practise light wind sailing along with some roll tacks. At Sidmouth SC, one of the other classes we race is the Scorpion. My dad races a Scorpion, and despite having three sails, against my ILCA’s one sail, I usually give him a good run for his money. Tonight’s race was no exception, and I did not finish too far behind…. mainly because they got caught on a lobster pot. Another local hazard of sailing at Sidmouth. Post-race curry back at the club house was excellent.

We sailed a couple of sessions today. A coaching session in the morning, followed by the usual two races in the afternoon. A full day of sailing!

I improved my tack technique today by instead of swapping my tiller and mainsheet between hands as I am tacking, swapping them after. This really helped today as the winds were particularly strong. In the morning, the conditions were perfect for practising race starts. It was blowing about 10-15 knots, and I was using my radial rig, the bigger of my two. In the afternoon, the wind picked up to a bit more than 15 knots and so I changed my rig to the smaller 4.7 for the afternoon racing. I made this decision because I was only just able to keep my boat upright this morning and the wind had picked up so I knew that I would not be able to this afternoon. I did not fancy a swim as the sea is still quite cold. After the first race, the wind dropped down to about 5 knots. Wished I had kept my radial on! An excellent full day of sailing the ILCA though!